Saucy Nancy will perform tracks from Karsilam-a-rama for the Final Veil CD release show on Sat, June 8 at Plush in St. Louis MO at 8pm. 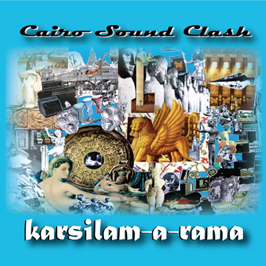 The 2nd full-length album, Karsilam-a-rama, is completed and now available in mp3 format on itunes, amazon, cdbaby and elsewhere.

Spence is currently recording the next full-length Cairo Sound Clash album for release by 2012. On this new album, he is building all the songs from actual acoustic/electric instrumental performances without electronica whatsoever (ie; free of synthetic instrument and drum sounds). This approach is becoming rarer in modern bellydance music and is a conscientious objective for this particular body of work.

Saucy Nancy is currently choreographing CSC songs for use in the next Belly Dance United theatrical production in June, and for performances in an upcoming dark tribal fusion festival, Angels & Absinthe, featuring Ariellah, Tempest, M'chelle Demars and Ami Amore.

CSC song Chiftidelic has been choreographed by the lovely Ariellah for personal performance use, as filmed recently by Puzzling Evidence TV at The Dark Room in Los Angeles, CA.